The following has been taken from the Australian Honey Bee Industry Council Inc’s Industry Notice:

AHBIC has been advised by the Department of Agriculture and Water Resources that a swarm of Asian bees (Apis cerana) has been found in Darwin in the suburb of Karama. A local beekeeper was called, on 13 May 2018, to collect a swarm of bees and noticed that they were most likely Asian bees and reported this to the local Apiary Officer. All bees have been destroyed including the queen.

Examination has shown no presence of external mites i.e. Varroa or Tropilaelaps. Examination for internal mites is also being conducted. DNA identification will also be carried out.

Northern Territory Departmental Officers are starting a surveillance program initially concentrating on a one (1) kilometre radius for the presence of other Asian bees.

The AHBIC Executive is considering a response to this incursion.

Further information will be sent out as it is received.

Trevor Weatherhead AM
Executive Director
16 May, 2018 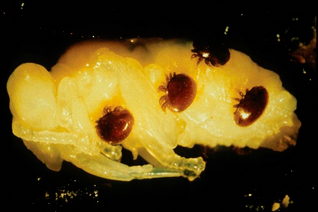 The CRC for Honey Bee Products is supporting the Australian...